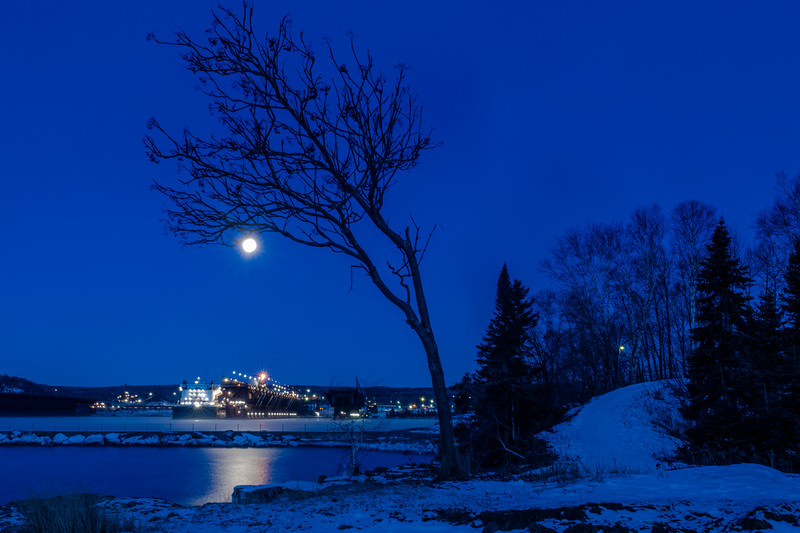 The full moon was on the night of January 11th so I decided to head to the North Shore of Lake Superior with my photography goal of capturing the full moon rising over Lake Superior! Although I have many images of the moon over Splitrock Lighthouse,  I intended to go to the same general area. A photographer can always get something different because of clouds, ice formations etc. When photographing the full moon I always feel the night before is always better, although it is not the "official" full moon, you can never tell by the image. My reason is the moon will rise very close to sunset time which gives some nice ambient light for the photographer to work with. The night of the full moon the moon always rises much later, usually 30-40 minutes after sunset and your foreground elements will be quite dark. The other best time is the morning after the full moon when it sets. Generally the moon will set sometime around or shortly after sunrise and again giving the photographer some nice ambient light to work with. On this occasion I had some bad luck on both Friday and Saturday nights, nothing but clouds and the moon did not make an appearance for this photographer. However on Saturday night after being disappointed again, I checked the weather forecast with my cell phone and the clouds were supposed to clear out around midnight. I was staying in Two Harbors and used my cell phone and pulled up "The Photographers Ephemeris"  to check moon set times and location over Agate Bay on Lake Superior. In the morning sunrise was 7:50 AM and moon set was 8:42 AM @ 301 degrees. I than drove over to Agate Bay before dinner used my compass and walked around the area checking locations at 301 degrees. I found several locations that could make interesting MoonScapes. In the morning at around 5:45 AM drove to Agate Bay and spent the next hour or so taking setting full moon images! Technology in these digital times is a huge bonus for us photographers and we must take advantage of them. After 3 days I did go home with some full moon images, not the images I may have had in mind but still some nice night shots of the full moon.

Note: I used a bright flashlight to shine on the tree which allowed me to manual focus.

Fine tuning and sharpening in Photoshop